The War Spirit At Home

The War Spirit At Home

I never knew a woman to falter or to be found for want no matter how trying a duty she had to perform in the field or at home.  North and South, the women of this great nation demonstrated their heroism and devotion.

Many families were faced with the loss of their primary financial supporter as men joined the military, and often became casualties or prisoners.  The government was not prepared or equipped to assist dependents of the army.  No form of insurance or pensions had yet been established, and the government suspended the pay of a prisoner until he was reunited with his regiment. (3)  Destitute families of soldiers became primary recipients of local charities during the early years of the war and communities bonded together to support and console grieving families.  At times local charities provided food and clothing for the most needy.  In an era when the acceptance of charity was considered demeaning, the necessity to survive forced many women and children into the workplace.  Thousands of women from different levels of society were thrust into the industrial world.  Compelled by the necessity to provide for their families, these women developed an attitude of self-reliance, and public apprehension of female independence slowly eased.

The war machine generated overwhelming demand for the mass production of supplies and provisions, creating jobs in factories, arsenals, sewing rooms, and offices.  Entering industries ranging from textile to munitions production, the new workers found that the wages were often very low and hours exhaustingly long.  Many employers appropriated tremendous profits for themselves, not offering proportional increases to employees confronted with an inflating economy.  The stagnation of wages during the war lent itself to an active growth of the lower class struggling to compete with the rising cost of living.  It is estimated that living costs increased approximately 100 per cent while the average wage grew only 50 - 60 percent.  This percentage was even lower for women, barely reaching a 25 percent increase from 1861 to 1864. (4) 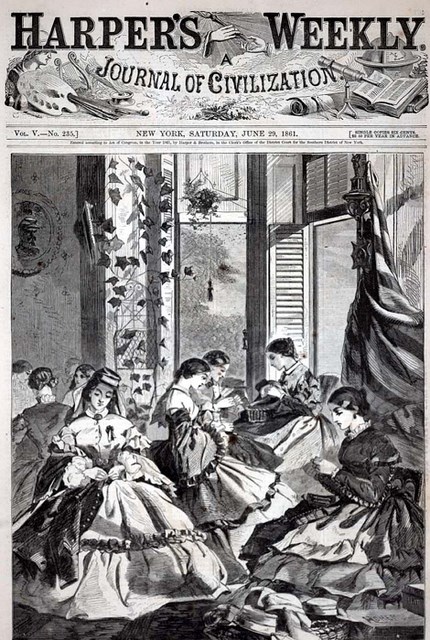 Many women sought livelihood as seamstresses and although the demand for this skill was consistently high during the war, there remained a surplus workforce of needy seamstresses.  The overabundance of workers in this profession often abetted low wages, allowing unscrupulous government contractors to exploit their employees, and underbid independent firms.

The availability and use of the sewing machine further complicated the situation of the seamstress sewing by hand.  Being paid by the piece, these women were not able to produce the same quantity of materials as machine-equipped workers.  Small sewing rooms, such as that run by Caroline Stansbury Kirkland in New York in 1862, created employment for indigent women.  Determined to pay her seamstresses a salary suitable to the rising cost of living during the war, Kirkland was desperate to maintain contracts for work.  Threatened by the failure of the sewing room, she wrote, "that if closing became necessary, 'nothing short of starvation awaits the poor wretches' for while those using sewing machines might 'make their bread', the ones sewing by hand would go hungry."  (5)

Additionally, women working for large government contractors were often mistreated.  In 1861, payment for finished clothing was 17 1/2 cents for a shirt.  By 1864, when living costs were at their highest, payment for a shirt of similar quality dropped to 15 cents.  By 1865, some contractors were paying as little as 8 cents per piece in order to maintain and win government issue.  An average week's pay for a seamstress during the last days of the war often did not exceed $1.54, at a time when the weekly wage for a common craftsman, such as a blacksmith, was approximately $10 to $14. (6)  Women employed at the Schuykill Arsenal at Philadelphia in 1861, sent a petition to the Secretary of War, stating their mistreatment by the Arsenal.  Having had their wages cut by 50 percent, these women banded together to protect their rights and their families' well-being.  The document was signed by 138 employees and also indicated the personal status of all the petitioners: "Anna Long, Widow, five children, Sarah Holland, widow, four children, Ann  Nugent, widow, tow [sic] sons at war," etc. (7)

As a result of the mistreatment of seamstresses, The Workingwoman's Protective Union was established on November 18, 1863.  A formalized control of labor standards was the primary objective of the organization, and women in all forms of industry were represented by the Union.  The WPU ridiculed society's apprehensions of allowing women to pursue occupations outside the accepted spheres, and accused society of restricting the female pursuit of a broader range of vocations.  Without access to varied employment opportunities, women were confined to limited advancement while battling mistreatment, poor working conditions and wage discrimination.  Although the organization and its cause were supported by the press and even Abraham Lincoln, many regulations were ignored and compensation ultimately did not meet government standards.  The seamstress who tirelessly worked to provide clothing and provisions for those fighting the war was perhaps the greatest sufferer of the working class.  Many indigent families supported by these women fell victim to extreme poverty. (8)

According to the 1860 census, one quarter of the manufacturing work-force was already composed of women. (9)  Industries including jewelry manufacture, hat-making, paper mills, fireworks production, perfumery, and textiles largely depended on female staffs.  Holding positions in what was considered light labor, women were not entitled to benefits or financial advancement.  In light of the changing structure of society during the war, male-dominated industries reluctantly opened their doors to women.  Enlistees and disgruntled striking workers were often replaced by women seeking employment.

Work in munitions factories and arsenals became available to women and a number were killed in accidental explosions while wrapping cartridge packages, which were often stored dangerously in the same space.  Others perished in the fires that resulted from the explosions.  The unfortunate fashion of the hoop skirt intensified the danger of the fires, one skirt igniting the next.  Forty women died in the explosion  at the Confederate States Laboratory in Richmond while numerous others fell victim to similar mishaps in Washington, D.C., Allegheny, Pennsylvania, and Waterbury, Connecticut.

Women also entered male-dominated offices.  In a move initially met by controversy and opposition, Francis Spinner, the United States Treasurer, spearheaded the integration of women into the office as early as 1861.  Supporting the efficiency of his female staff, Spinner was successful in securing many positions for women, ranging in responsibility from clerks to currency counters, at salaries often reaching over $700 a year. (10)  Although many of these war-time appointments were established through influential sponsors, women entering these positions were sometimes unjustly accused of promiscuous activity and expelled from the work space. 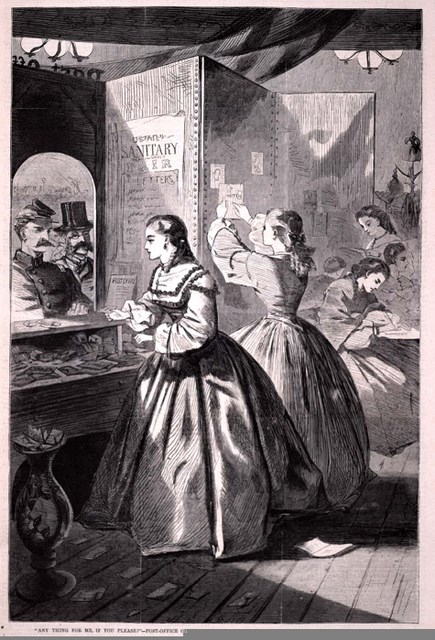 Despite some negative response, other departments, including the War Department and Department of the Interior, hired women as clerks and copyists.  The Post Office soon followed the initiative of the Treasury Department and began hiring postmistresses.  The extraordinary increase in postal activity generated the need for a larger and proficient staff.  Women were well suited to the responsibilities of the Post Office Department and during the Civil War they assisted in moving a daily average of ninety thousand letters through Washington. (11)

(Harper's Weekly, "Any Thing For Me, If You Please?" Post-Office of the Brooklyn Fair In Aid Of The Sanitary Commission. March 5,1864)

Prior to and during the war, the rearing of a child's moral and spiritual consciousness was a primary responsibility of the mother.  The teaching of academic subjects, however, was sought outside the home, in both public and private schools.

At the onset of the war, and as it progressed, increasing numbers of enlistments and higher-paying opportunities in industrial fields took many male teachers away from their respected positions and opened the door for women to join the profession.  Initially, women entering the field of education were met with contradictory opinions from the public.  Many Northern and Southern communities were uncomfortable with the appointment of female teachers and expressed reluctance and prejudice towards these women.  Although there were many female teachers employed before the war broke out, education of the young was considered primarily the responsibility of men.  Only 25 percent of the nation's teachers in 1860 were women. (12)     Interestingly, a shift in public attitude occurred quickly as it became apparent that women were willing to work for less pay and comply with restrictions including curfews and celibacy.  As the war progressed, the position of teacher became a widely respected vocation for 'well bred' young ladies.

Teachers during the war were confronted with a unique responsibility.  In addition to the daily curriculum, they also encouraged their students to assist in the war effort.  Organizing sewing circles, collecting supplies, and arranging benefit recitals gave children an association with relief causes, and established a very real sense of unity and camaraderie within their school, community and nation.  A remarkable example of their efforts is evident in the events and exhibitions organized by the public schools during the New York Metropolitan Fair, where the Children's Department raised $24,600 for the Union cause. (13)

The achievements of women teachers during the Civil War established the foundation of the profession today.  The extraordinary efforts of their work and their struggle against wide-spread oppression was acknowledged in September of 1865, in an editorial in The New York Times which praised the advances made by female educators: "It is pleasing to see women assuming such great prominence among us as educators of youth.  It is a duty in which many more ought to be engaged.  It is work to which intelligent women are preeminently adapted." (14)

Return to Heroes of the Home Front.