Over-crowding, disease, poor provisions, and lack of care were concerns and issues that confronted families and communities in both North and South.  The Sanitary Commission was a primary factor in the regulation and proper administration of medical and humane relief for the Union soldier.  Women who did not pursue nursing as a vocation during the war aided the Sanitary Commission by organizing committees to prepare and collect food, clothing and medical supplies for the Union Army.  The primary function of their operation was to 'find the need and promptly supply it no matter what it was or where.'

Although it was a common attitude that women had a natural aptitude for nursing due to their domestic experience as care-givers, it was, at the same time, considered improper for women of modesty and virtue to administer aid to strange men in army hospitals.  Critics contended that women were too frail for such exhausting work, that it was inappropriate, and potentially embarrassing for gently-bred women to participate in medical attention to the wounded in a semi-public place.  Despite the possibility and actuality of public ridicule, it is estimated that over 3,200 women served as paid war-time nurses during the war in both the North and the South.  This figure, however, does not account for the thousands who served in their own homes and in publicly organized hospitals who were not compensated. (30) 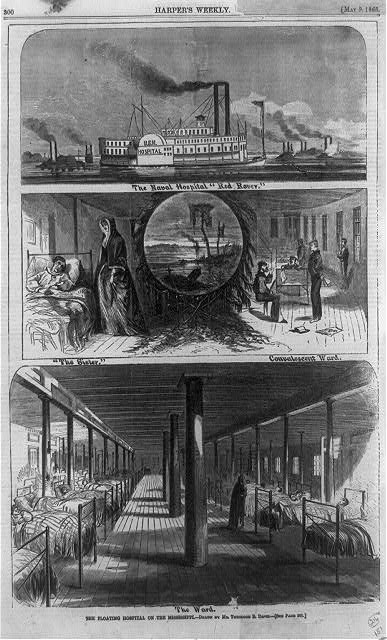 As more and more women came forward as volunteers to the nursing cause, their patriotism and compassion were applauded by the press.  Although numerous Union doctors and medical staff vehemently opposed the incorporation of women into the profession, particularly during wartime, Dr. Elizabeth Blackwell's nurses training program was accepted by the Woman's Central Relief Association in April,1861. (31) Dorothea Dix was appointed Superintendent of Women Nurses, and immediately developed a standard of qualifications and regulations for all those applying for positions.  The minimum age of an applicant was thirty and only those 'plain in appearance' were considered.  Regulation dress consisted of a woman's own apparel suiting the description, 'somber, unadorned, and hoopless.'   Interestingly, no formal experience or training were prerequisite.  The initial volunteers were offered no compensation, but soon Congress passed legislation providing forty cents a day wage plus subsistence and transportation to and from their posts. (32)

The widowed nurse, Mary Ann Bickerdyke, known during the war as 'Mother Bickerdyke', attracted enormous attention by forcing Union officers to establish proper antiseptic environments in military hospitals.  Her reputation as a loud, strong-minded and opinionated woman preceded her and few challenged her authority.  Even General Grant commented, "Mother Bickerdyke out-ranks everybody, even Lincoln."  Another of the best-known nurses, Clara Barton, began her war-time service aiding the Sixth Massachusetts.  Soon turning to nursing, Barton made personal appeals to her New England friends to provide her with food, clothing and medicine that was so desperately needed on the battlefield.  Although field hospitals were soon filled with wounded after each battle, Clara Barton refused to wait for them to be brought in.  Instead, she often went directly to the battlefield to administer to the injured, ignoring the efforts of the army to prevent her from doing so.  "I did not wait for reporters and journalists to tell us that the battle had been fought, I went in while the battle raged." (33)

As glorious as field nursing seemed to many at home, the makeshift hospitals in many small communities were no less significant.  With active support from the Sanitary Commission, local aid societies were tireless in their efforts to maintain clean and efficient environments for the numerous sick and wounded that were sent home to recover.  Most of these local hospitals were staffed by volunteer nurses who gave their time and offered the amenities of their homes to the care of the war-time victims.

Young women who were refused or unable to enroll as nurses were compelled to create patriotic activity.  Elida Rumsey Fowle was refused admission to the nursing corps due to her age.  Insistent on participation, Elida entered the soldiers hospitals as a singer and storyteller giving hundreds of performances to the wounded.  Her desire to do more initiated the establishment of a soldiers' library in Washington.  Collecting thousands of books, newspapers, and writing materials, as well as organizing training programs, the library provided the soldiers an opportunity to enhance their skills and expand their education.