~ Riotous Writing ~ The Herald of Freedom ~ Authorship and Attribution ~

Newspapers were the most prevalent form of mass media during the 19th century.  Decades before the notable muckrakers, authors and reporters were doing their part to inform the public of political intrigues, elections, and corruption.  In the decades leading up to the Civil War, increasing tensions caused division between regions, states, cities, and even neighborhoods.  After having articles denied by a Danbury weekly paper, PT Barnum published his own paper, The Herald of Freedom and focused on the dangers of sectarian interference in political affairs. 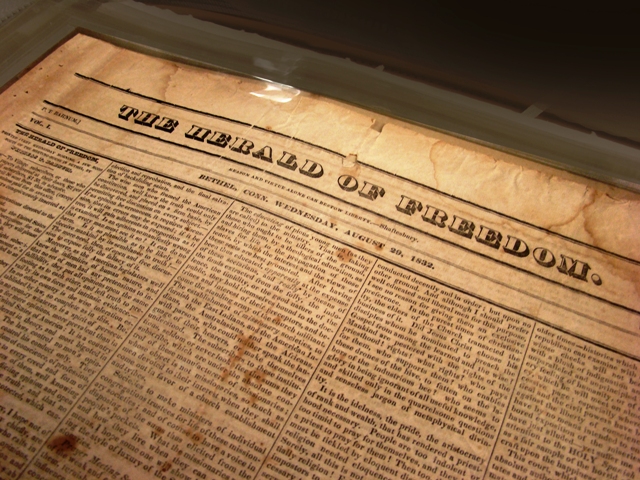 On October 19, 1831 Barnum published his first issue of The Herald of Freedom, using his own press and types, shortly after buying out his uncle’s share of their store enterprise.  With little experience in the workings of the press, Barnum was charged three times in three years with libel, the first time for accusing a Danbury butcher of being a spy for the Democratic caucus.  The second time was withdrawn and so Barnum does not discuss it in detail in his memoirs, and the final charge resulted in his jailing for 60 days.[1]  Regardless of his sentence and situation, Barnum continued to publish his papers and gained notoriety, so much so that after his release there were toasts, dinners, speeches, and odes in his honor.[2]  Barnum issued 160 editions before handing it over to his brother-in-law John W. Amerman, who eventually sold the paper to Mr. George Taylor in 1835.

The paper itself focused on political issues with the idea of “equal rights” featuring prominently in the writings.  With the election of 1832 on the horizon of Barnum’s first publication, good material abounded.  Some of the more intriguing articles in the Museum’s collection of The Herald of Freedom center on the Jackson party elections.  An article on September 5, 1832 ran information from the Stamford Sentinel, “It has been sagely predicted by the opposition that the administration would loose much strength in the western states, in consequence of the President’s withholding his signature from the United States Bank Bill, but actions speak louder than words…GLORIOUS VICTORY!!!”[3]  Barnum goes on to state the counties in which ‘Jackson party’ candidates won elections.   The list of victors includes language such as “Jackson party wisdom” and “Clay bank aristocracy”.   This famous political event in American history, the issue of the National Bank, gives current researchers a glimpse into Barnum’s political world.

Not only does Barnum focus on the election at hand but also the role of religion, specifically the definition of Universalism.  Having grown up attending a Baptist Church with his mother, Barnum developed a sense of the eternal at an early age.  His most profound writing on universalism is a pamphlet, the first in a series, titled “Why I am a Universalist”.[4]  Written months before his death and published in 1890 in London, this pamphlet expounded upon early leanings that are evident in The Herald of Freedom.  Each edition of the paper included sermon series, poems, and other articles concerned with his faith.  These theological writings included the tenants of the Universalist faith that Barnum describes in “Why I am a Universalist”.  The pamphlet works to address the criticisms people made of Universalism including the idea of God’s love applied to all persons.  In The Herald of Freedom, writing as the voice of Jesus, Barnum writes, “Behold all souls are mine; and if any man hear my words and believe not, I judge him not, for I came not to judge the world but to save the world.”[5]  The idea that God’s love was applied evenly to all people, regardless, was not a new idea but was a revolutionary one for the conservative New England churches.  It was the principle of equal treatment that fostered Barnum’s support of movements such as women’s rights and abolition.

One of the interesting trends to watch in American History is how parties have arranged and rearranged themselves over the course of the decades to represent certain demographics.  In his early writings, PT Barnum was a staunch Jacksonian-Democrat. He admits, “I began my political life as a Democrat, and my newspaper, the Herald of Freedom, was a Jackson-Democratic journal.”[6]  However, in his later years, he switched his alliance to the Republican Party and voted for President Lincoln.  Barnum justifies his actions saying, “The Kansas strifes, in 1854, shook my faith in my party, though I continued to call myself a Democrat...  When, however, secession threatened in 1860, I thought it was time for a ‘new departure’, and I identified myself with the Republican party.”[7] This switch was experienced across the country as those who formerly supported the idea of personal freedoms under Jackson extended their ideas of freedom to include those living in slavery.  Knowing no other way to support an issue but to jump in with both feet, Barnum went so far as to support marches by the Wide-Awakes to his Bridgeport home, Lindencroft.[8]  The Wide-Awakes was a grassroots movement of mainly young men who participated in paramilitary activities including marching companies. Started in Hartford, Connecticut, this political entity worked to defeat Democrats in districts the country over.[9]

PT Barnum’s shift in political leaning prompted the famous cartoonist, Thomas Nast of Harper’s Weekly, to immortalize Barnum in a political cartoon.  This cartoon depicts a “what is it”, which was the promotion for one of Barnum’s oddities of the day – a man who appeared and of course was billed as the missing link between man and animal.  This particular oddity drew in crowds following the publication of Charles Darwin’s Origins of the Species.[10]  In the political cartoon, the “what is it” is Barnum’s friend, Horace Greeley, who along with Barnum was accused of being a turn-coat on issues that ranged from economics to slavery.  The newspaper was a powerful medium for addressing current issues and political trends.  In his early career PT Barnum learned how to use the power of the press and exercised his free speech.  Both of these lessons would serve him well in his future, as his expertise in managing the media would yield him high exposure, high dividends, and impressive influence.

The Herald of Freedom featured prominently in Barnum’s early life.  The paper serves as important historical record, giving us a clearer picture of his political leanings and thoughts on society.