The Metropolitan Fair, [in New York] which opened on the 4th [April, 1864] instant is in every respect a demonstration worthy of the large-hearted and patriotic benevolence of the commercial metropolis of the country.

Although financially backed by prominent businessmen, (by law, women at this time did not have independent financial standing) the fairs were developed and managed by teams of women.  The first and most successful of the large fairs was held in Chicago in 1863.  Initially the concept of such an event was met with an attitude of indifference from the male-dominated business faction. Their involvement was little more than financing the planning stages.  The actual and extraordinary execution of the concept of the fair throughout the Midwest was taken on by Mary Livermore, Jane Hoge  and many other insightful, enterprising women.  Information regarding volunteer opportunities, community involvement, organization of activities and events, and the need for the contribution of monetary and saleable items was disseminated in all towns and cities, cultivating support from those of high social position to those of the poorest means. Thousands of items were collected as sale merchandise for the fair, and families of lower as well as upper income contributed to the Union cause.  The massive amount of donations, ranging from family heirlooms to potatoes, assisted in raising over $100,000 during a two-week period. (23)  Following the success of the Chicago Fair, the New York Fair, in April, 1864, raised over $150,000 during the first two days. (24) 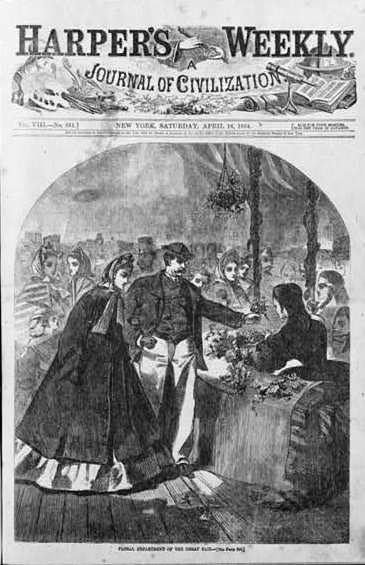 Perhaps the most clever solicitation was made by the organizer of the Chicago Fair to Abraham Lincoln.  It was suggested that the original draft of the Emancipation Proclamation would be a prestigious donation, giving credibility to the fair. "There would seem great appropriateness in this gift to Chicago & Illinois, for the benefit of Western soldiers, coming as it would from a Western President."

"Ladies having charge of the North Western Fair For the

According to the request made in your behalf, the original

draft of the Emancipation proclamation is herewith

enclosed … I have some desire to retain the paper; but if

it shall contribute to the relief or comfort of the soldiers

that will be better.

The overwhelming success of the Chicago fair inspired women all over the North, and even the South, to attempt its imitation, and fairs to support the war effort were organized in many small towns and large cities throughout the northeast.  In a manner similar to the great industrial expositions, large temporary buildings were often constructed as the sites for many of the major fairs.  Funds were raised through admission fees, lotteries and refreshment rooms.  All aspects of business were represented in the fairs.  Commemorative and ceremonial objects were designed by many companies and were sold or auctioned during fair rallies.  The arrangement of the New Jersey   Department at the New York Metropolitan Fair was under the artistic direction of the artist Jasper Cropsey and featured a variety of industrial production ranging from printing to household manufacture.

The staggering organization of the large fairs incorporated a wide diversity of entertainments, demonstrations, and exhibitions.  Items of every sort were donated for the fairs as sale merchandise.  Large tables were arranged throughout the Grand Halls and presented an eclectic grouping of contributions from communities all over the New York area including Westchester, Harlem and Norwalk, CT.  The items for sale, such as patriotic memorabilia, souvenirs made by soldiers, porcelain, glass, books, musical instruments, personal and household accessories, produce, flowers, toys and saddlery cluttered the displays.  Female Commission volunteers wearing regulation costume were stationed at each table and encouraged sales, relying on patriotic fervor. 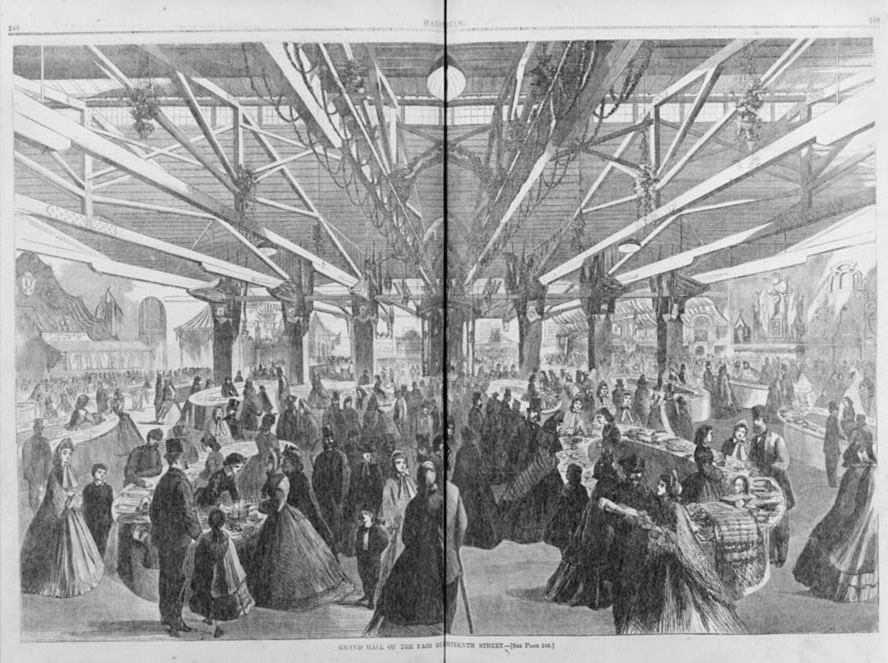 The Department of Arms and Trophies, presented at the Museum of Flags, Trophies and Relics, was a highlight of the New York Metropolitan Fair.  A collection of Revolutionary War relics, guns, swords, uniforms, and artifacts from the battlefields of many wars (including recent skirmishes) as well as flags, tomahawks, and arrows were borrowed or donated to create a dramatic impression and arouse great patriotism and nationalistic pride.  The Arms Department generated perhaps one of the most provocative rallies during the fair.  Two presentation swords, contributed by Tiffany & Co., were held in contest for the favorite army and navy officer.  Every person attending the fair had the opportunity to vote and "every person who pays one dollar has one vote." (26)  The rally raised significant funds for the Commission and the recipients of the swords were Admiral David Farragut and General Ulysses Grant whose votes alone generated $30,291. (27)

The Picture Gallery was yet another highlight of many fairs.  The concept of consolidating fine arts within a specific space, open exclusively for the purpose of a large viewing public audience was innovative and met with overwhelming success. (28)  Many private art collectors, including LeGrand Lockwood, John Taylor Johnston, and William T. Blodgett generously loaned pieces from their collections.  Admission into the gallery and the sale of over two hundred paintings aided the relief effort significantly.  Specially commissioned works by major artists of the period such as Albert Bierstadt, Asher B. Durand, and John F. Kensett also generated huge sums.  Other works, including Emmanuel Leutze's 'Washington Crossing the Delaware' and Frederic Church's 'The Heart of the Andes' were on special exhibition.  These works and those of many other artists brought renown and attention to the fairs, and became major attractions to the events. Harper's Weekly quotes on opening day of the New York fair "The Picture Gallery … is an eloquent witness of wealth, magnificence and progress in art and refinement of the greatest city of the Western continent." (29)

Proceed to The Medical Demand.