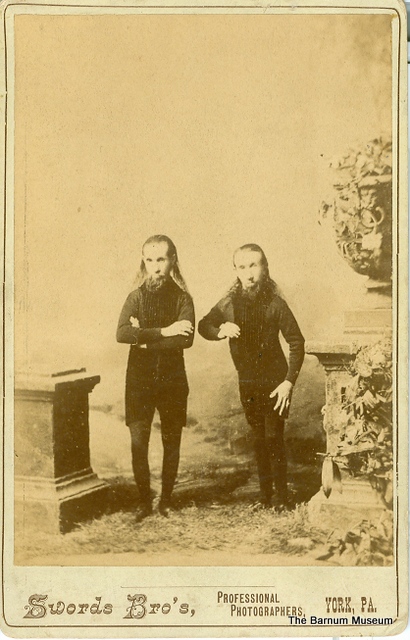 This week’s photo is of Waino and Plutano, better known as the “Wild Men of Borneo”. The two men made up an act for P.T. Barnum’s circus. Their small stature combined with their impressive strength attracted audiences across the country. Their draw was also partly due to the stories that Barnum spread about them though advertisements detailing their difficult capture and vicious natures. In actuality, they were simply Hiram and Barney Davis who were raised in America by English parents.

Reply Mark
10:19 PM on August 29, 2012
It was amusing to see the photo of the "Wild Men of Borneo." A bit of a let down, though, to learn that Waino and Plutano's real names were Hiram and Barney Davis!

As far as advertising is concerned, I have a handbill titled "The Wild Men of Borneo! or Modern Sampsons, Recently the Great Sensation in Boston, and Eastern Cities. The Greatest Curiosities Ever Seen By Man."

It is for a for a parlor levee, but there's no date or location. The type is pretty fancy and there's a small illustration showing one of the boys on stage before a genteel looking audience.

Most of the handbill is taken up by a long poem, "Words Dedicated To Wano and Plutano, Wild Men of Borneo." It starts:

In the Island of Borneo, beneath an Eastern sky
Just under the Equator, with mountains towering high,
Where roves the wild Ouran-Outang, Gorilla and Malay,
And beasts of fiercest nature are watching for their prey,?

The huntsman with his dog and gun, undaunted, undismayed,
Walked forth into the forest to prosecute his trade;
When, looking up in search of game, perchance his eye did see,
Two little men of infant size suspended in a tree.

I'll spare you the rest--amazingly, the quality of the verse actually declines in the remaining four stanzas.