This year I participated in the #AskACurator day. This event had over 600 museums from over 30 different countries available on Twitter to answer questions.  Some interactions were direct but other people posted general questions for anyone to answer. Just as I would answer one question, 24 more would appear with the hashtag and I was in complete social media overload! Here are a few of the more interesting questions I answered:

@DrDonnaYates: Everyone should be showering @BarnumMuseum with great #AskACurator questions! Do you spend more time presenting objects or the man?

@SpinsterAunt: @BarnumMuseum Did the whale really boil alive in its tank at the American Museum fire in NYC in 1865?

@CurateReynolda: What object from your collection has given you goosebumps recently? #askacurator

@TinctureofMuse: Hello curators! Do you read reviews of your exhibitions? Do you change anything because of a review? #AskACurator

@JillianJ: @BarnumMuseum @AskACurator Guess on the lighter side, have you seen Barnum the musical and did you like it?

It was never ending and always engaging.  People asked philosophical questions, history questions, simple questions, and hard questiosn. And as I watched the ticker go mad throughout the day, one post caught my attention:

I had to pause and frantically engage in conversation with the Polar Museum because we too have a sleeping bag from a polar adventure! The story on their sleeping bag is that Capt. Oates, who was sick and freezing to death with the rest of his expedition party, wanted to save his friends from caring for him so one night he got out of his sleeping bag and walked into the polar abyss. Our sleeping bag is from the rescue of the Greeley expedition by the USS Bear.  Greeley and his men were researching and barely surviving for three years in the North Pole. When he was rescued, there were only 6 men out of the 25 original party members still alive. From talking with the Polar Museum, it would seem that very few of these polar artifacts survive today. Ours was donated just years after the 1881 expedition to the Bridgeport Scientific Society and has been at the Barnum Museum ever since! But in the words of @polarmuseum, "moulting reindeer skin is a conservation nightmare!" Can't wait for #AskACurator day next year.

What is a Registrar?

Let's admit it, when meeting someone new your first question is often "what do you do?" And by that, the questioning individual means "what is your job?"

When I answer "registrar" I am met with blank stares or sometimes a question about college grades and transcripts.  So my tagline for being a registrar has become "I research and catalog artifacts."  This is true of my position because we are a small institution and I have the luxury of researching.  But for many museum registrars there are too many very complicated, very legal, and very important documents that they handle on a daily basis and so "paperwork" is our job.

Every artifact has an accession file which includes not only a deed of gift but also an object card, related research, conservation reports, and a record of loans.  Some museum's have enormous collections that are loaned frequently.  Loan documents are very important legal documents that establish ownership as well as perimeters for the borrower.  Imagine borrowing the Mona Lisa without proper paperwork... suddenly the woman is smiling in my bathroom instead of the Louvre! All of these documents provide information on the safe handling of the artifact and are important for the curator, researcher, visitor, and registrar alike.

I must say my favorite part is acting as a detective.  When someone seeks information on an object, the first place to look is the object's file.  If there isn't additional research on a pair of opera glasses and their maker, for example, I must track down that information.  Why do we have opera glasses in our collection? Did Barnum own them or use them? How did the owner find these opera glasses? What could have brought the glasses to Bridgeport? Was there an opera house in Bridgeport that PT Barnum could have, would have attended?  It is always fascinating to see the connections between our materials and our history!

Decorating for the Gala

We are busy preparing for our Annual Gala! 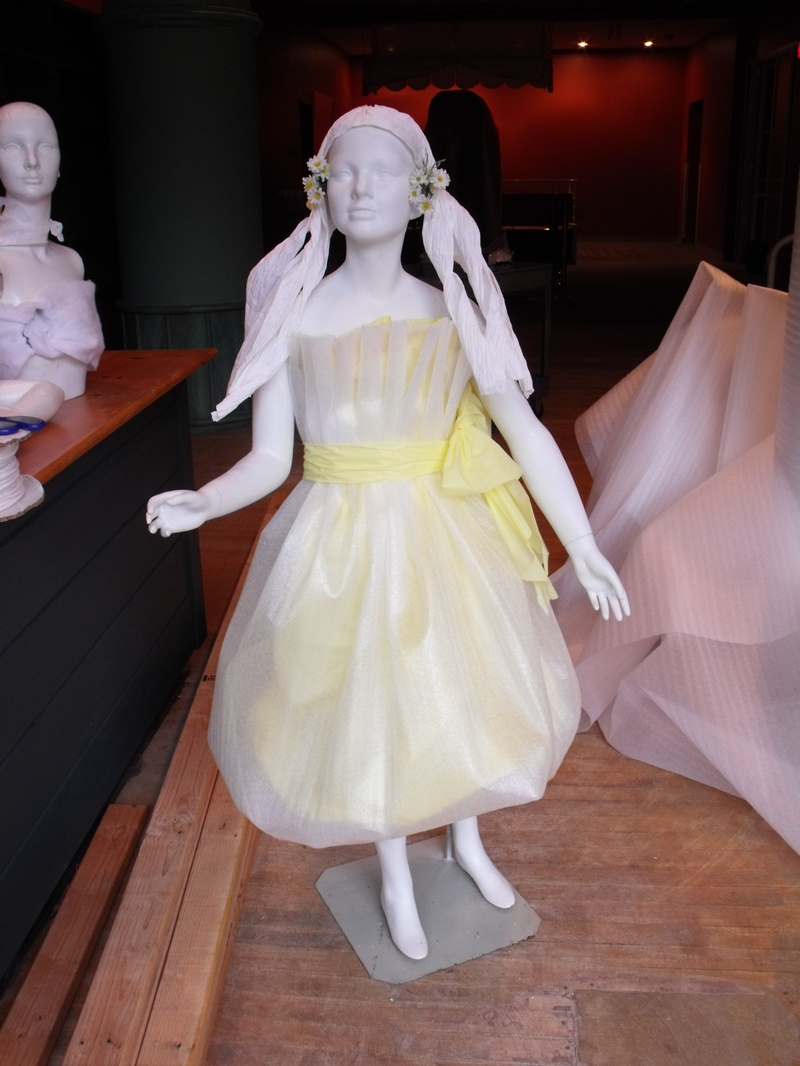 In preparation we’ve started decorating the windows with a vignette that shows animals, children, and adults stepping right up to buy tickets from P.T. Barnum himself for the Gala. We’ve decided to use packing materials as our cloth for the ladies’ dresses and while bubble wrap cannot be sewn by any machine we’ve found, packing tape seems to work just fine!

and stop by to see the window when it is finished later this week!

Thank you for your concern over the Barnum Museum! We worked diligently on Friday of last week to secure the items within the Museum and to board up the windows in preparation. The beautiful etched glass globes of the chandeliers came down and the remaining paintings were safely stored. Even Baby Bridgeport was wrapped and secured against Mother Nature. Thankfully, the Museum lost power for only a brief period and sustained no known damage at this time. The staff could use your best wishes as some are still without power and that makes for a difficult day at work, I’m sure you know.

If you have been driving by lately you would notice that we have construction cones, a large construction van, and now a dumpster outside our door. Thankfully, the scaffolding company came to put up the dome scaffolding before the storm and perhaps that helped to secure us against the winds. In addition, we are moving forward with taking down the old insulation in the ceiling of the third floor so that the structural engineers can get a decent look at how the tornado affected the dome’s structure. We’ve been very busy amidst the storm!

If you are able and are interested in helping institutions across the state of Connecticut who were damaged by Hurricane Irene please check with your local museums and the New England Museum Association’s website www.nemanet.org. I am sure volunteers are needed for a variety of tasks as the clean up continues.