Anthony Comstock: "Roundsman of the Lord" 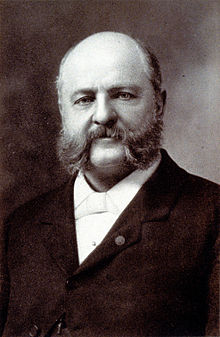 Leading the charge against obscenity in Victorian America was one man, Anthony Comstock (1844-1915). Born in New Canaan, Connecticut, Comstock’s name would become synonymous with oppressive laws governing public morality. Early in his career, Comstock served in the Union Army during the American Civil War fighting with Company H of the 17th Connecticut Infantry. His service was unremarkable and without incident, though he did make one telling objection during his time in the army. He objected to the use of profanity amongst the soldiers. This was his first documented complaint about obscenity and would be part of a pattern throughout the rest of his life.

In 1873, Comstock founded The New York Society for the Suppression of Vice. Having worked with the Young Men’s Christian Association (YMCA) following the war, Comstock formalized his position on the growing obscenity problem in the United States and gained a following of like minded individuals. Together as The New York Society for the Suppression of Vice, they were able to influence congress into passing increasingly restrictive laws regarding the delivery and transportation of obscene, lewd, or lascivious materials. Included under this vague umbrella were pornographic “French” postcards, books both novels and non-fiction, and informational pamphlets on issues such as contraception and birth control, and the treatment and prevention of venereal disease. The most stringent of these laws was known as the Comstock Act.

Aside from being one of the major driving forces behind such laws, Comstock served as the primary enforcer of his namesake law. He was made a special agent of the United States Postal Service. In addition to giving him the power to look through mail and to restrict the delivery of items as far ranging as letters to anatomy textbooks, Comstock received full police powers up to and including the right to carry a weapon.

He opposed many groups and notable individuals from the long 19th century including early suffragettes including Victoria Woodhull and Tennessee Claflin, playwrights such as George Bernard Shaw and political activists like Emma Goldman. Ida Craddock, a distributor of marriage manuals that were at times sexually explicit, even condemned him in her suicide note following arrest and prosecution under the Comstock Act. Comstock would claim later that he had driven fifteen people to suicide. He did have some admirers most notably a young law student named J. Edgar Hoover.

Over the course of his career, it is estimated that he destroyed 15 tons of books, 284,000 pounds of printing plates for engravings, 4 million pictures and initiated 4,000 arrests. Though, he died in 1915, his influence continued to be felt throughout the 20th century.

New York Society for the Suppression of Vice